For looks, he can be described having a simple design like that of Rilakkuma's with shinier eyes, darker fur, a smaller stature, and bear-shaped designs painted with honey at his bottom and feet. He has a bush of fluffy white fur on his chest and smells like sweet honey. When he opens his mouth, you can see fangs.

Unlike his friends, he does not possess anything "plush like" (either it being a button, or a zipper), suggesting he is a real bear.

Korilakkuma met him while on vacation with Rilakkuma and Kiiroitori in the Honey Forest. Chairoikoguma, (or Kogumachan) is usually seen walking on all fours, even if he can stand up straight like his partners.

The four friends all climb the trees together, play tag, and sometimes tend to fight over honey. via Kogumachan's San-X reveal photo.

Chairoikoguma/Kogumachan enjoys spending time tending his garden, he is a honey farmer and works alongside his friends, the Kumabees.

He is an adorable small baby bear and enjoys spending his time napping or going out to play. 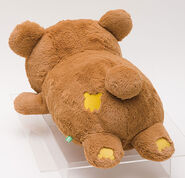 This shows his feet and honey on his butt 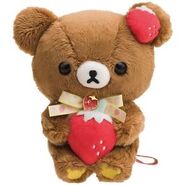 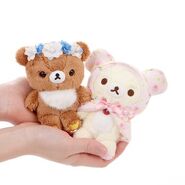 The whole squad
Add a photo to this gallery
Retrieved from "https://rilakkuma.fandom.com/wiki/Chairoikoguma?oldid=4224"
Community content is available under CC-BY-SA unless otherwise noted.