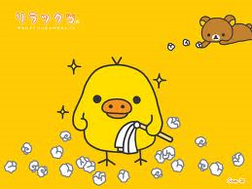 Kiiroitori is a small, yellow bird often seen with Rilakkuma and Korilakkuma.

Kiiroitori is a cute, small yellow bird (A chick) with an orange beak (In the movie he looks like he does not have a sharp beak).

Kiiroitori is basically the opposite of Rilakkuma because of the bird's hard-working nature. He likes broccoli and Rilakkuma throws it at his face! He likes to clean, and as seen in "Facts" he gets a job as a cleaner in "Getting A Job”.

Kiiroitori is a yellow bird (chicken) who lives at Kaoru’s house. Kiiroitori means “yellow bird” in Japanese. He used to be in a birdcage, as seen in "The First Day". He comes out at his own discretion and scolds Rilakkuma and Korilakkuma because Rilakkuma is too lazy and Korilakkuma is too mischievous. Sometimes he feels down because he thinks he scolds them too much. He plays a tsukkomi role (considered to be the smarter, more logical one who criticizes others for making mistakes.)

Retrieved from "https://rilakkuma.fandom.com/wiki/Kiiroitori?oldid=4305"
Community content is available under CC-BY-SA unless otherwise noted.