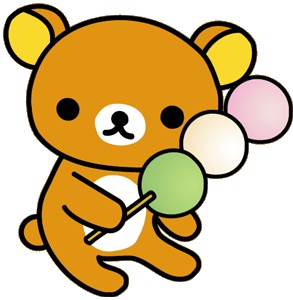 Rilakkuma is a Japanese character created by San-x. He has his own shops in places such as Kichijoji and Tokyo.

Rilakkuma is a brown bear with a white patch around the center of his face and his chest.

Rilakkuma has a laid-back personality.

Rilakkuma has been revealing his appearance since September 2003, turning into one of the ultimate "kawaii" brands for San-X. Other than his name basically meaning 'Relax Bear', and him originating as a character in a kids' storybook, there is very little information about him...however, we do know he loves dango rice, pancakes, omurice, and custard pudding, but could eat a variety of foods, based on the author's style. His friends are Korilakkuma (the white Rilakkuma-style bear) and Kiiroitori (the bright yellow chick).

Retrieved from "https://rilakkuma.fandom.com/wiki/Rilakkuma?oldid=4222"
Community content is available under CC-BY-SA unless otherwise noted.